Since her arrival in USA in 1994, pianist and composer, Sakky is always rated by her surrounding communities, one of most creative musician who truly has her original voice with great technique on her piano playing .
" She is always very inspired - Music is her love ! " - Joanne Brackeen, jazz legendary master pianist.
" She is truly original voice. She has a bright future in the jazz contemporary world." - Michael Orta, Grammy awarded pianist. " Her work as a pianist, composer, and arranger has consistently been of the highest caliber." - Gary Campbell, saxophonist, clinician, author, Warner Bros. Publications. "Her piano playing creates the most exquisite musical space, with remarkable technical control, musical insight and projection to an audience." - Carlos Averhoff, Grammy awarded saxophonist.

Sakky's album "Tropical Blue", released in 2003, was a shining collection of her original compositions which was reviewed as - " Highest originality and imagination. Just touching you ! - Progressive, soaring jazz fusion and smooth jazz that stirs the imagination," as well as the album notes - " Sensitivity is coexistent with Passion. - Sakky's artistry is so exceptional with her eclecticism and versatility. - Among many, an attractive melody maker, Sakky's songs must be easy to catch and remain in listener's heart with each various hip danceable beats. - Blending her freedom from musical genres - pop, jazz, funk, latin, R&B, reggae, upbeat, dance, new age and etc., with traditional way based on her masterly knowledge and skill as an accomplished musician."

Sakky received her Master of Music degree in Jazz Performance from Florida International University in USA where she was a full scholarship recipient and graduate assistant, and worked as a concert band pianist.
She also obtained her Bachelor of Music degree in Jazz composition and performance from prestigious Berklee College of Music in Boston, USA where she graduated with honors and received the Jazz Performance Award (Best Jazz Pianist ) from the professional performance division in 1999. While at Boston, she also earned a credit of jazz legend, George Russell's " Lydian Chromatic Concept " seminar at New England Conservatory, that brought more depth and universal approach to her writing composition. Not only an exceptionally gifted pianist, but also Sakky is a prolific composer. Many of her original compositions and arrangements have been performed by critically acclaimed college concert bands such as the FIU concert Big Band. She also worked as " Talent Evaluator and Adjudicator " for the USA Song Writing Competition in Ft. Lauderdale, Florida, the world's leading international songwriting competition.
As a performer, her appearance together with internationally acclaimed jazz artists includes Bob Mintzer, Arturo Sandoval, Sam Rivers, Michael Brecker, Calos Averhoff, Kevin Mahogany, George Russell and many more. She was also mentored by jazz legend- Joanne Brackeen, Jazz Grammy winner - Michael Orta, Walter Beasley, Oscar Stagnaro, Gary Campbell, Dave Samuels.

At the age of three, she started learning classical piano at The Yamaha Music School and soon performed as a piano player in children's operetta series broadcasted by the NHK educational TV program when she was in elementary school. Also, by that time, her first original short composition was broadcasted at the NHK radio selected among the local student.

She started performing professionally as a demonstrator for Yamaha keyboards as well as teaching as a certificated instructor of Roland and Hammond Organ when she was in the Meiji Gakuin University, Tokyo, Japan. At the same time she toured around her country to support well-known Japanese pop, folk singers and TV personnel as a member of the bands and established her versatile style by playing together with many artists from all musical genre; jazz, pop, latin, chanson, rock, japanese folk, R&B, classical through the year. Sakky also appeared at renowned local jazz venues such as " Pit Inn " or " J " in Tokyo metropolitan area as a jazz pianist. Also her polishing up her compositional style as a composer and song writer, eventually her original composition won a Second Prize at the Song Writing Contest sponsored by Japan Music Center in 1987.
In 1989, Sakky enjoyed seeing musical scene in New York and took part in Jam sessions during her completion of the summer school at Colombia University in New York, USA. Soon after she moved to Boston to attend Berklee College of Music in 1994, that was just the beginning of her long valuable stay in USA. Her extended musical activities were from Tokyo, Boston, New England area, New York to Miami along with her academic accomplishment. After returning to Japan from her 15 years long but intensive musical journey in USA, pianist, composer Sakky continued to pursued her own artistic goal. Since she has been an active performer and composer both in US and Japan, her flexible musical style, mastery knowledge and technique meet demands in all aspect of musical scene, that always led her to further productive directions. 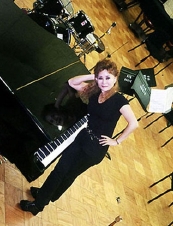